Will Niche SVOD Services Ever Stand a Chance?

Netflix sounded the death knell for video rental retailers. Hulu and Amazon joined in and drove the nails into the coffin. Now practically everyone has access to streaming video on demand (SVOD) services. These 800 lb. media gorillas hog the market share of SVOD services, leaving a tiny percentage of customers seeking other service providers. Netflix, the pioneer of SVOD, commands the lion’s share of the market.

With Netflix, Hulu, and Amazon Prime Video controlling so much of the SVOD market, what does this mean for niche SVOD providers? Services like Crunchyroll, Seeso, the WWE Network, and Curiosity stream provide SVOD services that are geared to a smaller market, with specific interests. These providers will never compete with the big three when it comes to holding a large share of the market, but is there room in the market to survive? Targeting niche consumers can be successful, especially when your product fills a hole that consumers can’t fill elsewhere. We pulled user data on these niche providers and compared it to data about the top SVOD providers currently – what can this data show us about the potential for niche SVOD services to survive — and possibly thrive — when they target their niche markets?

In an effort to understand who is using these Niche SVOD services, Luth Research analyzed user data for Netflix, Hulu, Amazon, Crunchyroll, HBO, Seeso, WWE, and Curiosity Stream — both the apps and the websites.

Netflix, Hulu and Amazon Prime Video are well-known brands, and likely won't need much introduction, but the niche SVOD brands may need a small introduction. Crunchyroll is a subscription video on-demand service that specializes in Japanese Anime and Asian content. HBO is a premium television channel best known for producing high-quality original series and films. Seeso is a subscription network focused on comedy content, including original and syndicated programs. The WWE Network is a subscription network for wrestling fans that streams live events, syndicated content, and original programming. Curiosity Stream is a subscription video-on-demand service that focuses on nonfiction documentaries about science, nature, history, and technology. As you can see, niche SVOD providers focus on a variety of programming across all genres.

Breaking down the collected data by user demographic and device revealed some interesting insights. Across the board, men are more apt to use websites and women preferred apps to watch streaming video. The strongest users of SVOD services hail from the Millennial (25-34), GenY (35-44), and GenX (45-54) demographics. Seniors over 64 years old overall comprised the smallest demographic of SVOD users, with one startling exception: Crunchyroll. Of Crunchyroll’s subscribers, 20.8% of the users in the study who use the service’s app are over 64 years old and 45.47% of its website users are young adults (18-24). 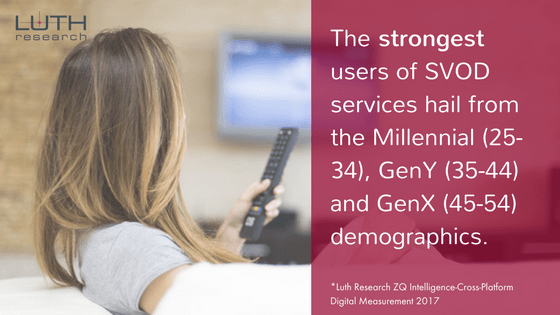 Use by region shows a fairly consistent distribution of use regardless of service, except, once again, for Crunchyroll. Crunchyroll showed a paucity of users in the Northeast — 5.83% of its subscribers — and nearly half (47.50%) of its users in the West. Except for Crunchyroll, all the above-named vendors show their highest subscriber base in the South. 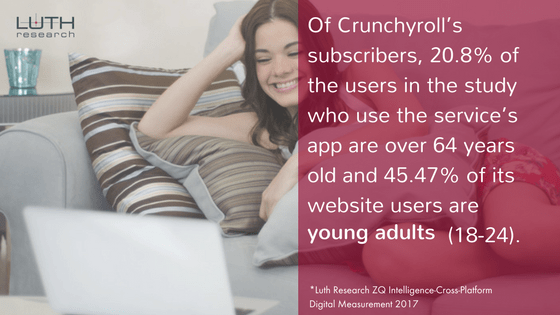 The problem with big SVOD services is that their large user base means they have to be all things to all people — and they can’t. Because people come with an infinite variety of preferences, they gravitate toward those vendors that cater specifically to those preferences. Knowing that niche specialties can be lucrative while satisfying a need not met or poorly met by the mainstream market, niche SVOD providers have been launched left and right. Experts estimate that over 100 niche SVOD providers in the USA and Canada now offer specialty programming from movies to cable television series.

Variety magazine reports predictions that niche subscription services will continue to grow. Many of these vendors share subscription numbers in the tens of thousands or even millions; others do not share their statistics at all. The data inconsistency forces market analysts to use other means to determine market share, such as mobile app rankings.

The uncertainty of subscribers and the risk involved in launching a new SVOD service necessitate diversity in revenue streams and narrowly targeted marketing to identify the need and figure out how to fulfill it. Thus far, genre-oriented services appear to have the most success. The WWE is moving its shows and showcase matches from networks to brand-owned streaming video. The NFL is experimenting. Shudder caters to horror aficionados. There’s more, lots more. The trick is to build and retain sufficient viewer interest in specialty programming like cable networks did back in the 1980s and 1990s with MTV, Arts & Entertainment, the History Channel, Animal Planet, and more.

Subscribers won’t necessarily carry the business; SVOD providers also rely upon pay-per-view income, paid programming, mobile apps, video games, etc. Take the story of Crunchyroll. It identified an existing audience for viewers interested in Japanese anime who would illegally obtain video content and then spend significant time adding subtitles. This same audience also commands a strong showing at anime-themed conventions. Crunchyroll acquired the videos and took the work out of enjoying them, thereby catering to this avid fan base.

A ready fan base certainly smooths the process. Like the WWE which founded its own streaming business in 2014, the NFL is following suit to satisfy the craving of football fans for live streaming football games. The beauty of company-owned SVOD service is that the WWE or NFL need not rely upon the fees and whims of networks and they can broadcast their content directly to any device enabled to receive and play the content. The company knows its subscribers’ demographics, which provides even better and more targeted data for their market analysts.

Any niche business can conflict with a notoriously fickle market. Customers don’t see the costs incurred with the acquisition of content, licensing, distribution, and recruitment of subscribers: they only see the content and experience the service’s convenience. Niche subscription services often charge premium rates for their carefully curated selection of content. Dedicated subscribers who don’t want to embark upon deep searches for specific content in mainstream services — which may not have that content because too few subscribers demand it for the acquisition, licensing, and distribution to be profitable — willingly pay for fast, easy access.

Companies seeking to ride the SVOD rocket ship must grab onto their courage and take a risk. In today’s “What’s in it for me?” consumer culture, the company must offer itself as the no-brainer option, especially if it must justify a higher subscription fee.

Market immaturity, however, may discourage summary dismissal of traditional viewing platforms. As niche SVOD services proliferate, they will rely upon sophisticated data collection and analysis to cater to customer expectations as well as acquire new subscribers. Their smaller size and focused markets contribute to operational efficiencies that enable them to identify customer shifts and respond more nimbly to market changes, which will help them to stay solvent.

Getting In Deep: The Why’s Behind Consumer Behavior

In today’s multi-device and multimedia world, customer journeys are far from linear. Customers are getting signals from all over – advertisements online, social media, email campaigns, websites, TV ...
Shopper Insights

The Importance of Adaptability in Market Research

Steve Jobs once said, "Innovation is the ability to see change as an opportunity – not a threat." Businesses need the ability to adapt, innovate, and stay creative to remain competitive in the ...