Results of Our YouTube Study: What Is Your Target Consumer Watching?

When developing ads for YouTube, knowing what types of videos your target market enjoys can help you to develop your ad strategy. To help you find out what genres of video you should target with your ads, we tracked viewers on YouTube and then compiled the videos into sixteen genres. Some of the highlighted results are shown below.

The top five genres in terms of volume of viewership are (of all viewers) People & Blogs (71.9%), Entertainment (68.5%), Music (65.9%), How-to & Style (55.3%), and Education (50.8%). While the first three genres also comprise the top three in terms of proportion of total viewership, the genres of Gaming and Film & Animation finish fourth displacing How-to & Style and Education. 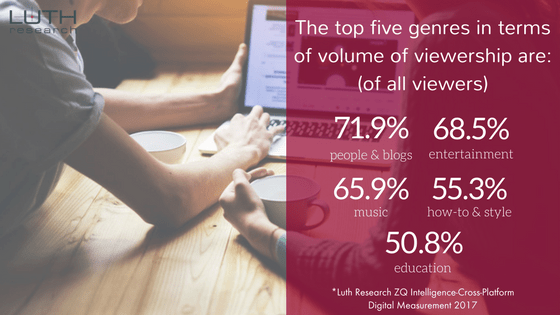 Perhaps even more telling about the genre of Gaming is that it finished second (behind Music) in terms of proportion of total viewing duration. In other words, people spend the most time watching music videos and videos about games and gaming culture than any other. These trends largely hold true across device types, including personal computers, smartphones, and tablets.

Interestingly, more than half of all viewers had watched some video on a private internet browser, which obscures some of the more specific viewership data. If “private viewing” were treated as its own discrete genre, it would rank sixth in terms of total popularity and ninth in terms of proportion of viewership. Men (54.9%) viewed videos on private browsers more than women (46.7%). 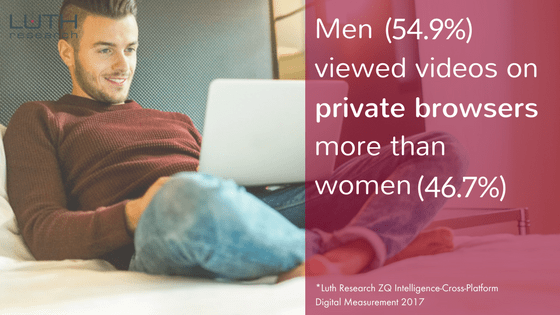 Speaking of the differences between men and women, a few intriguing details emerge when viewing the data. More women watched the genres of People & Blogs, Entertainment, Music, and Education, but the biggest discrepancy was in the genre of How-to & Style (8.7% of all women versus 4.6% for men). 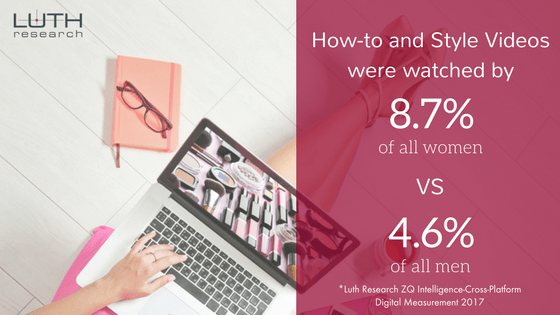 An even bigger chasm exists for the Gaming genre, with 11.6% of all men against 7.2% for women — an appreciable percentage that made it the fifth-most popular genre for women. Men also watched more videos in the Sports, Autos & Vehicles, and News & Politics genres, though to a smaller difference in degree. 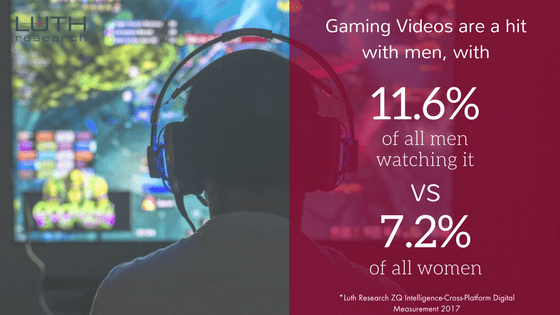 What do people making more than $100,000 a year prefer to watch? For the most part, this wealthy cohort prefers the same types of videos as other income brackets – People & Blogs, Entertainment, and Music are the top three genres – but they noticeably prefer News & Politics, Sports, and Autos & Vehicles more. This overlap is consistent with the more favored genres of men, which may account for some of this data drift.

Those who earn less than $35,000 a year consume far more Gaming videos than the average, but they also consume more News & Politics videos than those who make between $35,000 and $75,000 a year. This cohort also vastly out viewed the average for People & Blogs, Entertainment, and Music, which may suggest that they are pulling the overall numbers in their direction by virtue of having the largest sample size. 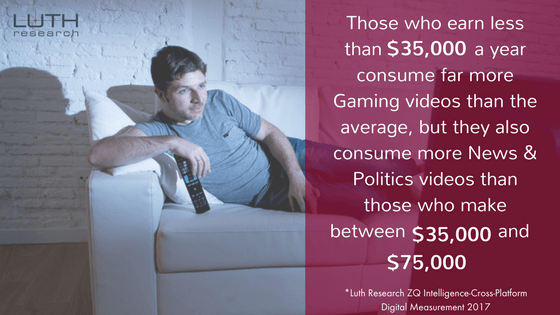 Luth Research utilized its proprietary tracking technology to create a sample size of greater than 20,000 individuals who viewed more than 4.5 million titles over the duration of the six-month study. All participants were based in the United States, giving a normal distribution of American video consumption habits. Beyond the videos themselves, data tracking included sites and apps visited, in-app metrics and ad exposure, and devices used were also tracked. For more, contact Luth Research.

What type of video would you make to boost awareness for your company? How does it respond to the data here? Let us know in the comments!

Getting In Deep: The Why’s Behind Consumer Behavior

In today’s multi-device and multimedia world, customer journeys are far from linear. Customers are getting signals from all over – advertisements online, social media, email campaigns, websites, TV ...
Shopper Insights

The Importance of Adaptability in Market Research

Steve Jobs once said, "Innovation is the ability to see change as an opportunity – not a threat." Businesses need the ability to adapt, innovate, and stay creative to remain competitive in the ...